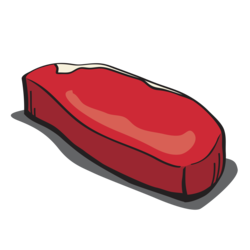 Sierra cut is counted among the most tender cuts in the Chuck and is considered a good choice to marinate and grill. It is a relatively recent addition to the range of Beef cuts. This cut is a good combination of meat and fatty content.

Sierra Cut can be cooked in a variety of different ways, all of which can yield delicious results if properly executed. This portion can be cooked using the dry-heat methods of cooking, following a few hours of marinating. These include grilling, broiling and pan-frying. This cut has the capacity to be cooked till well done. Be mindful while cooking this cut, though, as it can become hard and dry if overcooked. Braising also works well with the Sierra Cut.

A relatively new cut that is cut from the Chuck Roll, which is a part of the Chuck primal.

Sierra is basically a Spanish word taken from the Latin word 'serra', which means 'saw'. The cut is likely to have got its name due to its pointy shape that makes it look like a cutting saw.

The steak has become commonplace after a five year and 1.5 million dollar USD study to try and uncover new cuts of the animal that could be sold as steaks.