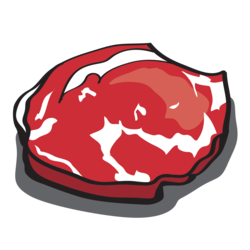 Chuck is a low-priced primal cut of Beef, which is known for its toughness due to the presence of a large number of connective tissues throughout its meat portion. Since it is rich in fat, it is considered to be a good option for making Ground Beef.

This cut of meat is low on tenderness due to the presence of connective tissues. For this reason, it is recommended that the Chuck portion should be cooked by using slow, moist preparation techniques. These include braising and stewing to yield dishes such as pot roast, soups, stews and broths. To make the meals more flavorful, beef stock and wines can be added to the Chuck as it cooks. There are other methods to tenderize this cut as well, which include grounding the meat and marinating the meat portions in a liquid-based marinade before cooking.

This primal portion of Beef is extracted from the forequarter of the animal. It covers the part of the heifer that spreads over the neck and goes on till the fifth rib. The Chuck comprises different segments of carcass’ neck, upper and shoulder blades.

The word ‘chuck’ comes from the English word ‘chock’, which in turn has been taken from the Old Irish word ‘tocht’ (meaning ‘piece’ or ‘part’).

This information about Chuck was sourced from our meat cut app