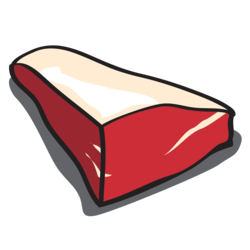 Counted among the toughest Primal Beef cuts, Arm Roast has been regarded as one of the leanest portions of Beef by the United States Department of Agriculture (USDA). In fact, this low-priced Beef cut is considered a healthy choice due to its minimal cholestrol content.

Being one of the less tender meat portions, it is best to prepare Arm Roast in a slow cooker. A simple yet delicious method is to marinate it with a spice rub and then cook it on low heat in a crock pot or slow cooker. According to the Texas Beef Council, Arm Roast should be cooked using the slow moist cooking techniques, such as covering it with different types of liquids like red wine, soup, stock or even water as it cooks. Braising and stewing also work well with this meat cut.

The Arm Roast is present in the Heifer Chuck part of the animal. It makes for one of the 8 primal meat portions. It is located at the meeting point of the first three ribs and the front shoulder. The cut is marked by the presence of a round bone in the middle and very little fat.

The use of Arm Roast was quite common a few decades ago, up until the time butcher shops had not been replaced by the packaged meat businesses. In recent times, it is difficult to find this cut as part of the retail meat cuts range.

According to the USDA, the Round Bone Roast contains even less fat and cholestrol than a chicken thigh.