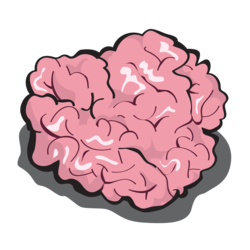 Brain is a popular offal cut of Beef, which is commonly used in international cuisines. It is a rich source of Omega-3 fatty acids but is also high in cholesterol. The consumption of this mousse-like organ has reduced significantly due to its high cholesterol levels as well as fears of contracting Bovine Spongiform Encephalopathy (mad cow disease), which can spread through nervous tissues of affected bovine animals.

There is little to no natural flavors in the Beef Brain. It can be a little tough to handle due to its gooey texture. To create flavor in this offal cut, it is seasoned with spices or different types of flavored sauces. Before starting to cook the Brain, however, care needs to be taken about its cleaning as it can contain blood and membranes in its folds. For this reason, it is imperative to first submerge it in cold water and change the water a number of times to ensure that the Brain is washed clear enough.

Brain is taken from the head of the animal, which is mostly from a calf.

The word ‘brain’ has been used since the time Old English was prevalent, with its roots going back to the Proto-Germanic word ‘bragnam’.

Archaeologists have discovered that when mourning a dead, Neanderthals in Europe would consume the brain.

This information about Brain was sourced from our meat cut app