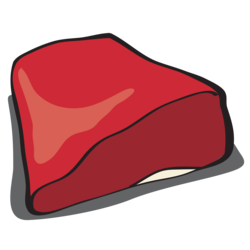 Sirloin Roast is a boneless cut of meat, which is typically sold rolled and tied in order to facilitate cooking. This is a juicy and somewhat tender cut of Beef that can bear exceptionally good results when cooked properly. There is not too much marbling on the cut, with just one of its sides covered in a layer of fat.

Due to its moderate tenderness and minimum marbling, it is advisable to cook this portion of Beef using the slow, moist cooking methods such as braising and stewing. Since it does not contain much intramuscular fat, the meat from this portion can dry out if overcooked. For this reason, it is better to cook this cut soaked in a flavorful liquid like some type of wine or Beef stock. To add further flavor to the dish, vegetables like onions, celery and carrot can be added to the mix.

Sirloin comes from the French word 'surlonge', which means 'upper part of the loin'.

Sirloin is a much more economical option as compared to the more premium priced Short Loin and ribs.