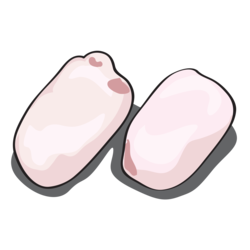 With their name, Beef Testicles drive a lot of people away. They can, however, turn out to be flavorful variety meat options if cooked in the right way. This offal portion is famous all over the farming areas of North America.

Beef Testicles are said to have a texture that is similar to that of the cow’s Liver as well as other variety meats. It is also described as a cut that bears similarity to Sweetbreads. The most common way of making this offal portion is to dredge them in a batter and deep fried. They can also be braised and cooked as part of especially cooked Beef stock. In recent times, professional chefs have incorporated them in many traditional dishes.

Testicles of the bull come from the scrotum area. Testicles belonging to Spanish fighting bulls are considered to be of greater value because they symbolize manliness and chivalry.

The cholesterol level of Testicles is comparatively higher than other cuts. They are, however, rich in testosterone, which is why they are considered strong aphrodisiacs in Chinese culture.

This information about Testicles was sourced from our meat cut app