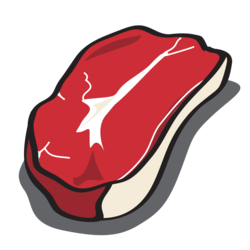 The cooking method for Blade Steaks depends upon which type of Blade Steak is being cooked. If the cut is taken from the Top Blade, it is advisable to braise it or slow-cook it in some liquid. If the connective tissue of the Top Blade is removed, however, it becomes a lot juicier and tenderized, making it easier for it to be used in pan-frying, broiling or grilling. It is a good cut to be used for making fajitas. On the other hand, the Under Blade Steaks are not suitable for broiling, grilling or stir-frying. The meat from under the shoulder blade is a much tougher portion of meat and should only be braised or slow-cooked in moisture.

This cut is taken from the Chuck and is the thinly sliced version of Blade Roast. To prepare the steaks, the meat is deboned and cross-cut through the meat fibers of the Chuck primal.

The word ‘blade’ comes from Middle and Old English, which literally means ‘a leaf’. It is likely that the flat and triangular appearance of a shoulder blade inspired the use of the word ‘blade’ to describe it.

When the Blade Steak is sliced to ¼-inch thickness (0.6cm), it is called ‘Bistec Del Siete’ in Spanish, which translates to ‘Seven Steak’, referring to the shape of the bone.