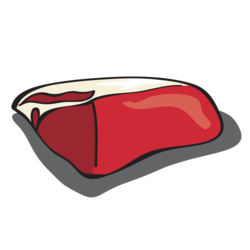 Rump Roast is typically a large log-shaped cut of Beef that is known for its toughness. If cooked using the right method, however, this triangular portion of Beef can make for a delicious addition to the menu at a very affordable price.

A good way to bring out extra zing in this cut is to dry-age it in the refrigerator before cooking. To create a dry-aged piece of meat, the Rump Roast should be placed on a wire rack set on a bowl and refrigerated for 1-4 days. Whenever the roast is needed for cooking, the dried patches due to aging should be trimmed off. When it comes to cooking the meat, braising or stewing yield the best results for this tough portion. Before setting it in the oven to slow-cook, however, the meat should be well-seasoned and browned on all sides so that its moisture remains sealed. Avoid overcooking as it can toughen the meat up.

The Rump Roast is taken from a section of the animal carcass that is part in the Top Sirloin and part in the Round primal.

The Rump Roast's alternative name 'Diamond Cut' is probably a reference to its triangular, pointy shape that gives it the appearance of a diamond.

In retail terms, the Rump refers to meat from the backside of Beef or veal. In reality, however, this cut can be extracted from any four-legged animal.