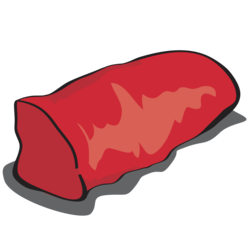 The Chuck Eye Roast is a cut that is comparatively high on tenderness than other Chuck portions but is still considered to be a tough meat cut due to the presence of a considerable amount of connective tissues dispersed throughout its fiber. It contains a large amount of fat, which adds to its flavor and juiciness.

Since it contains a considerable amount of connective tissues, experts suggest using the slow, moist cooking methods to tenderize this piece of meat. The best way to go about its preparation is to braise it or slow-cook it in some kind of liquid, among which red wine and beef stock are flavorful options. It can also be used to make soups and stews. The cut can be slow-cooked in the oven or, if using a crock pot, on the stovetop as well. If marinated overnight, the tenderness of this cut increases multifold, making it a good choice for the preparation of kabobs or steaks.

The Chuck Eye Roast is taken from the Chuck primal area of the animal carcass, which comprises the first five ribs.

The name for this cut is inspired by the fact that it is right close to the Rib Eye area, which starts from the sixth rib.

The cut is sometimes referred to as the Poor Man’s Rib Eye because of its considerably lower price as compared to the Rib Eye cut.