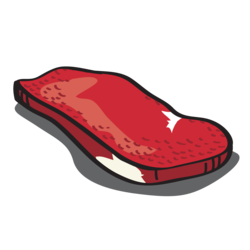 A thin cut from the rump, Rump Minute Steak has little marbling and no attached fatty muscle. Due to its small width, this cut takes very little time in cooking and is a convenient cut for those who want a flavorful dish ready in minutes, without having to spend too much time or money.

Even though its thickness is only about ¼ of an inch (0.6cm), it is recommended to pound this cut to tenderize and thin it even further. After pounding the meat and reducing its thickness, it can be seasoned with salt, pepper, garlic powder and Worcestershire sauce. To start cooking, oil should be heated in a wok and the steak should be fried on high heat just as long as it turns brown on each side. To add more flavor to the dish, a topping or glaze can be prepared in a separate pan. The steak is also popular in Asian cuisine, for which it is cut into smaller pieces and then pan-fried on a high flame.

Rump Minute Steak is a thinly sliced cut that is taken from the boneless portion of the animal’s hind.

Due to its thinness, this steak needs to cook only a minute on each side, which is why it is called the 'minute' steak.

Although minute steak is traditionally taken from the rump cap, it can come from other sections of the carcass as well.