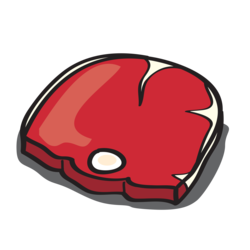 Round Steak is the thinner slice of meat cut from a Top Round Roast. Easy on the pocket, this is a relatively tougher portion of meat and does not have much fat or marbling.

Since it is not well-marbled and does not contain much fat, Round Steak can become dry and chewy if cooked using the dry-heat methods like grilling and broiling. It can tenderize to a certain extent if marinated for a few hours in advance, but should not be overcooked or else it can develop a rubbery texture. The best way to go about preparing this cut of meat is to cook it using slow, moist methods of cooking after searing it on all sides to seal its juices. The meat can also be tenderized by flattening it with a meat mallet. It can also be thinly sliced, smoked and dried to make Beef jerky.

Round Steak is a thinly sliced portion of meat, which is taken from the Round. The Round is present in the inner leg muscle of the animal, an area which is commonly known as the hindquarters.

Round' is the term used for a cow's rear in the United States. In other countries, the term might differ. For instance, Canadian term for Round is 'hip'.

In layman’s terms, the cut is often called London Broil, a reference to the dish that can be made out of it.