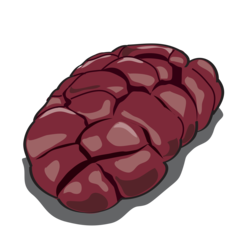 Much tougher than lamb or veal kidney, a Beef Kidney typically weighs one pound. They have a strong flavor, which is not to everyone’s taste. Kidneys from cows are not popular in the US but are commonly used in cuisines from other parts of the world. Kidneys from an adult cow are usually quite high in cholestrol and, therefore, should not be eaten too often.

Being a tough portion of the steer’s offal, the best way to prepare Beef Kidney is to cook it on low heat for a few hours. Methods like braising and stewing, which involve cooking the meat portion in a liquid, are ideal to ensure a well-cooked Beef Kidney. Before cooking them, however, it is important to remove their external membrane and the fatty muscle in the center. Additionally, it is recommended to douse the Kidney in either buttermilk or acidified water to lighten its smell and taste, which can be a little too strong for some people.

Part of the animal urinary system, there are two Kidneys present in every animal.

Kidney is a word that has been used since the early 14th century. While its exact origin is unknown, it is likely to be a compound word made of the Old English words 'cwid' (meaning 'womb) and 'ey' (meaning 'egg'), both of which seem to describe a kidney's shape.

Kidneys are rich in several nutrients such as Vitamin A, Vitamin B12 and Riboflavin.

This information about Kidney was sourced from our meat cut app