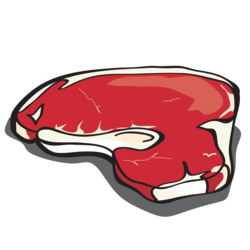 Flat-Bone Sirloin Steak is a tender but much bonier portion of the Sirloin. Since it has more bones than any other cut of the Sirloin, it is not considered a popular cut among the consumers. For this reason, it is not the priciest of Sirloin cuts.

Due to its closeness to the loin, this cut does not disappoint in terms of tenderness and is typically used for barbecuing, grilling or pan-frying. Being a portion of the Sirloin, it has the essential flavor of the section from where it originates. Although its bones are disliked by many, these bones add richness to the taste of this cut. To cook this piece, a simple marinade of salt and black pepper with a bit of oil should suffice. It can, however, be dredged in other coatings or seasonings as seen fit by the chef.

Flat Bone Sirloin Steak is the next cut on the hipbone (ilium) after the Pin Bone Steak. This cut contains traces of Top Sirloin, Tenderloin, Tri-Tip and Flap.

The hipbone becomes broader as the Sirloin is cut into deeper. Due to its increased width, the bone appears to be flat on this cut and serves as the basis for its name.

When the flat bone is taken out from this cut, it is marketed as Boneless Top Sirloin Steak. On the other hand, if the backbone is allowed to stay on this cut, it is referred to as Double Bone Sirloin.