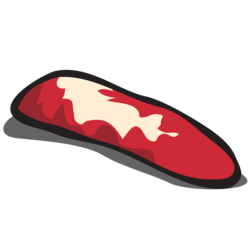 A thin type of beef cut, which bears similarity to Flank, Skirt and Hanger steaks. It is relatively economical and is full of flavor with finely textured grain.

Since this cut is low on tenderness, cooking experts recommend dousing it in a marinade before cooking. The ideal method of cooking the Sirloin Flap is to grill it on high flame so that it gets cooked fast and does not become chewy. For optimum flavor and texture, the steak should be cooked no more than medium-rare doneness. The best way to carve and serve these steaks is to slice them across the grain. By doing so, the connective tissue that binds the meat fiber can be manipulated, resulting in a juicier steak.

With its characteristic beefy flavor and toughness, the Sirloin Flap is cut from the bottom Sirloin, which is present right on top of the Flank and adjacent to the Short Loin.

The Sirloin Flap is increasingly being used in French bistros as well as Asian and Latin American eateries as a cheaper alternative to the more expensive cuts. It is also regarded by some as a member of the T-bone and Porterhouse steak types